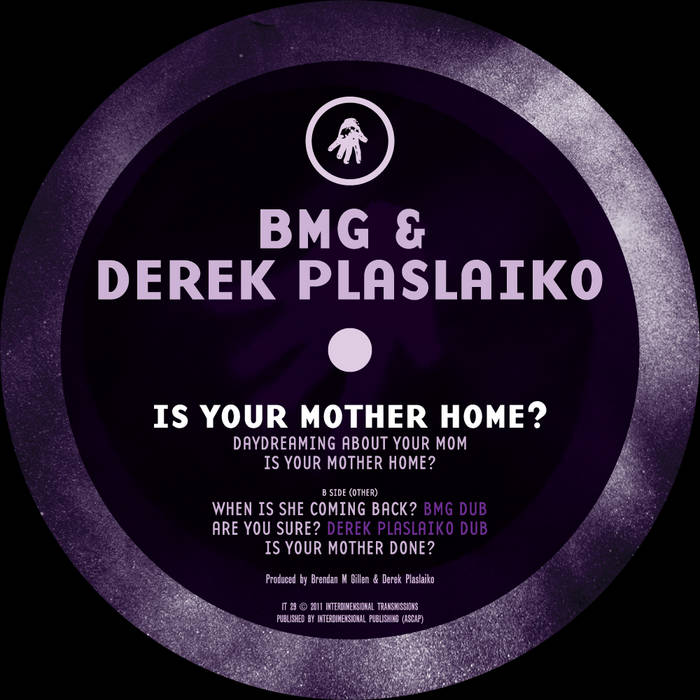 Derek Plaslaiko: Too long one of Detroit's best kept secrets, a core pillar of The Bunker in Brooklyn, now with a residency at Club De Legionaires in Berlin.  An indie rocker inspired by Techno, a speaker fucker from the original Detroit Rave scene, last name stolen from someone he was often confused for, a top midwestern deep mixing DJ turned record producer and remixer.


The Story of Your Mother:

BMG & Derek met while they both worked at Record TIme, Brendan later hiring Derek to work for his Star 67 Distribution.

Shortly after moving to Detroit in 2006, an era of Ectomorph ended. To find the inspiration to forge a new direction we began throwing a specific type of Detroit underground party. Initially conceived of in a phone call between BMG and Derek Plaslaiko, we wanted a party that seemed endless but that still only had 4 DJs, the others being our favorite unsung heros - master DJs of the Midwest, the likes of Carlos Souffront, Patrick Russell, and Mike Servito.

So Interdimensional Transmissions switched its focus to producing these underground events and in early December 2007, we threw No Way Back, a 12 hour party (that lasted 17) in a disused Detroit bank with a leaky roof. The leaky roof didn't stop anybody though, and Derek took that as inspiration to run through an unfinished wall. There's a you tube video of that.

Reclaiming old spaces and transforming them with installations (parachutes, netting, amorphous lighted structures and abstract cosmic spray paint art) and major audiophile soundsystems were core elements of this underground party system. Derek talked IT into producing No Way Back during the DEMF, to share this rare thing with the world. By 2010 we had partnered with The Bunker to produce a No Way Back DEMF and also Brooklyn, which continues to this day.

We wanted to created some music would hit sound system right at one of our parties. So in between Plasaiko's move from New York City to Berlin, we took a day out to make some music. We had effortlessly created the basic groove when Erika came over for a brief visit and noted the baseline was saying "get in the van". With that thought we took a little walk to the local convenience store, where we found more inspiration.

We were able to quickly write the lyrics and record all the pieces, and a raw mix was made that day that made it to tumblr, but the song was further refined in the mix over time and both BMG and Derek have made additional DJ tool dubs. The halftime intro / outro pieces were recorded at the beginning of the session.

The record is mastered at Prairie Cat Mastering, pressed at Archer Records in Detroit, and the first copies have sleeves hand painted by the installation artist for No Way Back, Infinite Dimensions.